How to get here

Today, Vitoria-Gasteiz boasts major communications and road, rail and air transport infrastructures, with fast connections with the rest of Spain and Europe. 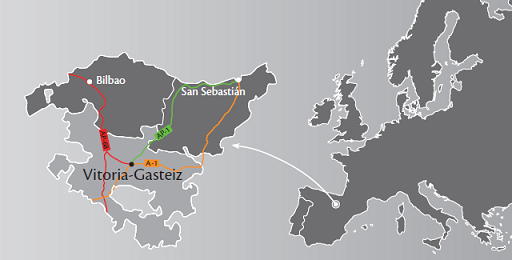 Vitoria-Gasteiz Airport (VIT) is located in Foronda, 8 km from the city. Has flight connections to Tenerife, Seville, Milan and Cologne. Those flights are commercialized through Ryanair airline.

Bilbao airport is the largest airport in the Basque Country and northern Spain. It is located 75 Km away from Vitoria; about 56 minutes by car.

There is also a bus service (Bizkaibus Line A3247 Bilbao-Airport) every 30 minutes (from 06:15 to 23:15) from the airport to the central Bus Station in Bilbao; from there the journey to Vitoria-Gasteiz takes less than one hour by bus.

Biarritz Airport (BIQ), in the southern French coast, is located 145 km away from Vitoria-Gasteiz; about 1 hour 35 minutes by car.

If you choose the bus, here are the addresses and telephones of the different bus companies and all the information about the Bus Station. If you want to move around Álava, there are also different bus lines .

If you want to move by train, visit Renfe's website for timetables and connection information.